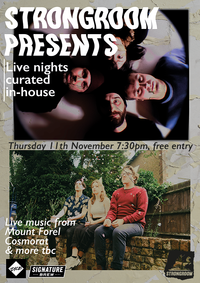 We have just recorded some new tracks for the next album at Strongroom studios, great to be back to play here, come and join us for an exciting night and awesome beers!

Cosmorat, formed with a member from the Strongroom Studios team. Cosmorat are a DIY indie-rock band that started in Boston, Massachusetts. Cosmorat now resides in London, UK.