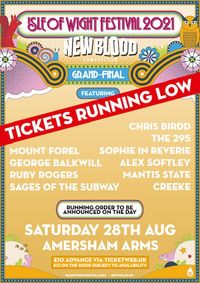 Out of the thousands of hopefuls that entered the Isle of Wight Festival New Blood Competition, the final few that remain are some of the most exciting and promising acts on the scene.

Having impressed a whole host of industry judges and music fans, our final 10 now battle it out at this special live Grand Final for a coveted slot at Isle of Wight Festival and to be crowned the winner of the New Blood Competition.

RUNNING ORDER TO BE ANNOUNCED LIVE ON STAGE ONCE DOORS OPEN

Sages of The Subway

This event is 18 and over